Overnight, Australia-time, the Center for the Study of the Legal Profession at Georgetown University Law Center and Thomson Reuters Legal Executive Institute, relying on data from Thomson Reuters Peer Monitor, published the findings of its ‘2018 Report on the State of the Legal Market‘. Reviewing the performance of U.S. law firms in 2017, as well as looking at the trends expected in 2018, this annual report is typically the “first” big report publication of the year and so a trendsetter of where we may be going as an industry over the next 12 months.

As has been the case in other years, the first chart I typically like to see in this annual report is the one setting out ‘Collection Realization against Standard Rates by Law Firm Segment‘ – Chart 9 in this year’s publication – to hopefully give me an indication of how an industry that largely relies on increases in hourly rates each year to boost top-line revenue is fairing.

As you can see, yet again the results here can best be described as ‘disappointing’: 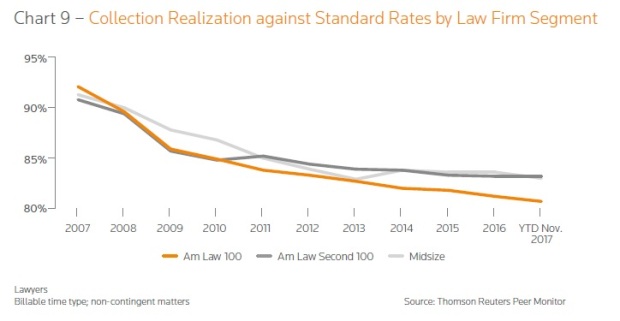 Either way, those levels of realisation would have most bank managers in a panic. And the reason they don’t comes down to one small issue: in law firms this collection rate – other than telling you that the market doesn’t see your hourly value as highly as you do – is absolutely meaningless.

What it is, is pie in the sky internal budgetary metrics against market reality cash in the bank.

So we turn to my second “go-to” chart: ‘Collection Realization against Worked (Agreed) Rates‘. This year this is represented in Chart 10:

As the name suggests, what this chart is showing us is “Collected v Worked (Agreed)”. I’m   assuming the “agreed” here is upfront, and I’m accepting that the picture is far from perfect, but there is a far better flatline realisation rate here of 90-ish per cent, or 90 cents in the dollar.

So, what’s my take-out from the two charts?

If you want to try and get a better handle on your projected cashflow, no doubt better to have an upfront conversation with your client about how much you are going to be charging them – however that is (fixed fee, hourly rates, etc) – than having an arbitrary, and less and less meaningful, ‘billable hourly rate’.