The billable hour has received a large number of death notices following the recent publication of Georgetown Law’s Centre for the Study of the Legal Profession and Peer Monitor’s ‘2017 Report on the State of the Legal Market‘.

The particular section of the Report that’s generating this excitement is this:

Death of Traditional Billable Hour Pricing. One of the most potentially significant, though rarely acknowledged, changes of the past decade has been the effective death of the traditional billable hour pricing model in most law firms. This isn’t to suggest that most firms have done away with billing based  on hours worked; indeed the majority of matters at most firms are still billed on an “hourly basis.” But  focus on that fact alone misses a fundamental shift that has occurred in the market. This change has been overlooked principally because of a definitional problem. In much of the writing on this subject, the focus has been on so-called alternative fee arrangements or “AFAs,” pricing strategies  that are based on fixed-price or cost-plus models that make no reference to billable hours in the calculation of fees. Since other pricing models typically incorporate some reference to billable hours, it has often been assumed that only AFAs are genuine non billable hour alternatives and every other approach is simply business as usual. That conclusion, however, overlooks a major shift that has occurred over the past decade: the widespread client insistence on budgets (with caps) for both transactional and litigation matters.

I’m not overly sure how they set caps in the US, but here in Australia I can say two things:- (1) we try very hard not to use caps as they are a lose-lose, and (2) where we have to set caps (and don’t get these confused with estimates), we go high – very high – because we know we are taking all the risk and none of the benefit!

But, if you read the Report you will find evidence of a trend that shows you that the billable hour’s days have to be numbered, as seen in the following two charts:

The first, a 10 year chart evidencing the death spiral of realization rates against largely arbitrary “standard rates” – whatever they are these days (fairly meaningless really). 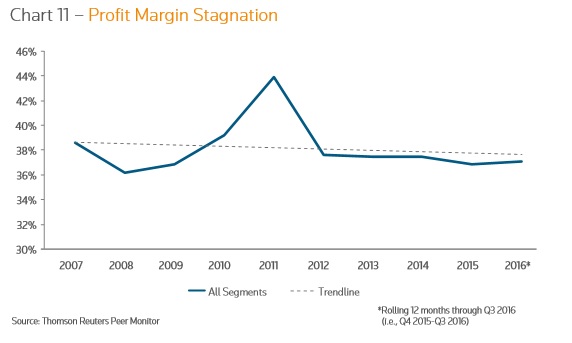 The second, a 10 year look at profit margin stagnation (anyone else getting the feeling its said with some kind of contempt?) at roughly 38%.

So what story does this tell me and why do I think this has more to say in the death of the billable hour than any capped rate will?

Well, first off, you can only maintain a stagnant profit margin of 38% in a market with freefalling realization rates if (a) you increase rates by 10% or more per year but then discount on those ‘standard’ rates – and as I posted recently, that strategy cannot last forever, or (b) you cut costs to the bones.

Either way, if  you want to continue any kind of continuing profit margin in the high 30%s – and I’d be surprised if you could find me an equity partner who doesn’t!, then you going to need to think about changing the way you charge for the work you do.

It really is that simple. And that’s the real reason why this Report tells me the death of the billable hour is nigh.